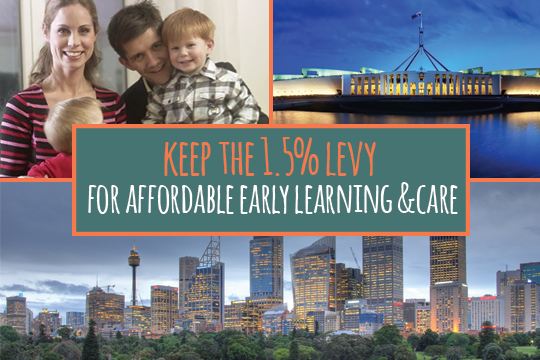 Sign up and show the Prime Minister and the Social Services Minister that we support them keeping the 1.5% levy on business to help fund more affordable high quality early learning and care.

Minister Morrison has admitted that the Productivity Commission’s recommendation to cap childcare subsidies at between $72 and $74 is too low and will make early learning and care too expensive for most families!

The level of government help the Minister offers needs to reflect the real cost of childcare for a family — no matter where they live or how many children they have or what their ages are!

As Catherine Fox, freelance journalist adequately summarises -“recommendations from the report by the Productivity Commission’s inquiry into childcare are rather like band aids for nasty wounds.
The report recommends watering down quality standards to save money and leaves thousands of parents paying more for childcare with some working mothers ending up with no support at all.

Key recommendations from the report:

- The Subsidy would be based on a “benchmark” figure determined by the government, not on the actual fees parents pay. So if your childcare centre charges above the benchmark, you would likely see a greater increase in your out-of-pocket costs.
- The subsidy rate would be means tested on household income with a sliding scale at 85% for families with incomes at or below $60,000 and 20% for families earning $250,000 or above. Families with a household income of $160,000 would see a cut in the rebate they currently receive.

- Payments would be provided up to 100 hours of care per fortnight for children 13 years and under, who have parents that work or study at least 24 hours a fortnight. This would leave 16.4% of working mothers who currently work one to two days a week with NO support for childcare costs.

Last week, the Prime Minister declared his Paid Parental Leave (PPL) scheme was gone with the funds instead to be used on making childcare more affordable for families.

However, a decision on whether the 1.5% levy on big business, that was due to help fund the PPL, would be redirected to childcare remains unclear.

Since this announcement, the Prime Minister has hinted that the 1.5% levy on business may be kept. But big business is lobbying hard to have the levy dropped.

The government had estimated that the levy could generate about $2 billion in additional funds - imagine the difference that could make to the delivery of affordable high quality early learning and care?

This is about all the beneficiaries of childcare helping to pay the way – government, big business, and mums & dads all have a role to play.

Sign up and show the Prime Minister and the Social Services Minister that we support them keeping the 1.5% levy on business to help fund more affordable high quality early learning and care.