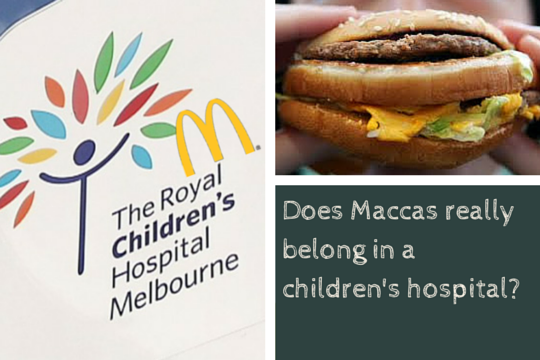 Is a children’s hospital really the best place to be selling cheeseburgers and french fries?

This is a serious public health issue, one that cannot simply be explained away by saying parents need to “just say no” to their kids wanting fast-food – it’s the environment we live and grow up in that significantly influences our diets.

With that in mind, why would the Premier of Victoria think it’s ok that Macca’s be readily available in a place where kids are trying to get healthy?

Even hospitals in the USA – home of the Big Mac - are stepping up their commitment to healthy food, and telling junk food chains to leave the premises.

Should RCH follow suit? Should Premier Andrews think again about his support for McDonald’s in children’s hospitals?

We think so.  Let’s send Premier Andrews a message that McDonald’s really doesn’t belong in our children’s hospitals.

Sure, many parents may use McDondald’s as a treat for their kids and it might be seen as a great distraction for sick kids in hospital.  But what public health message does it send having McDonald’s in a children’s hospital? Not a healthy one.

We can help distract our sick kids from the scary hospital environment in more ways then giving them McDondald’s.

Join The Parenthood’s “A hospital is no place for Macca’s” campaign today.