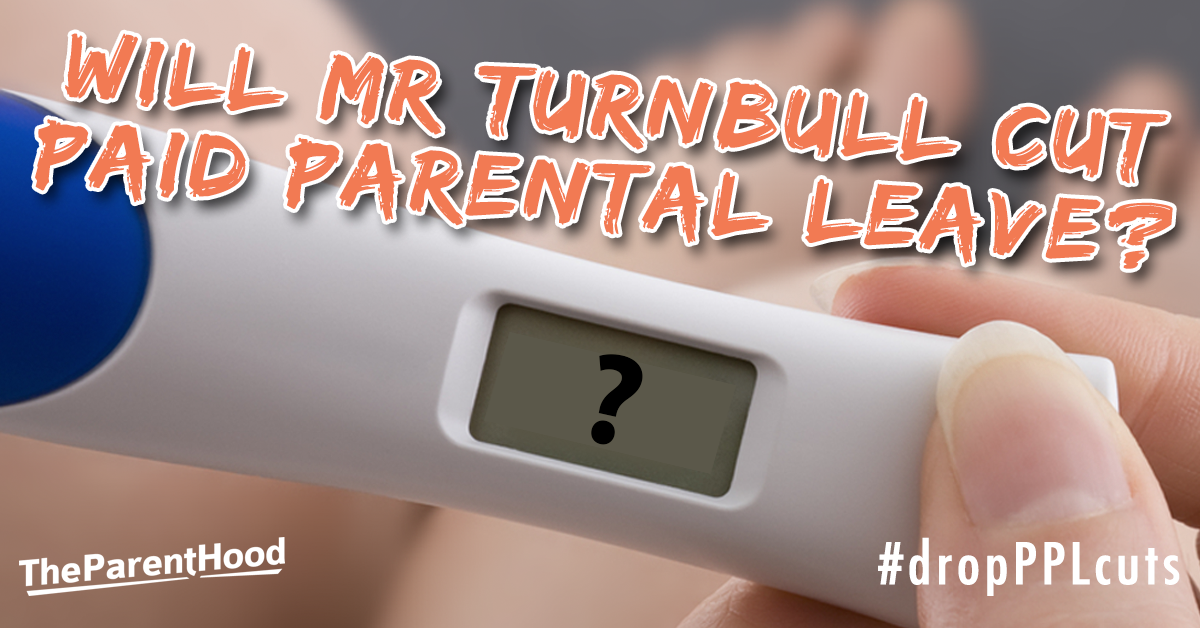 It’s time for the Turnbull Government to permanently drop their cuts to PPL.

We're still waiting! If these PPL cuts were a baby - they would have to be an elephant because the gestational period has been so long...

The Turnbull Government is still publicly stating that they want to push ahead with cuts to PPL, but we don't know in what form, when and with what support in the Senate.

The uncertainty is crazy. That's why we're calling on the Turnbull Government to drop any cuts to PPL in May's Federal Budget.

Remember today - 1 January 2017 - was meant to be the start date of Mr Turnbull's cuts to paid parental leave?

But thanks to us - Turnbull didn't get to start his PPL cuts today!

Let's celebrate - share the below post with your friends today and let's keep up the great work until we stop Mr Turnbull's cuts to PPL altogether!

We’ve had a campaign breakthrough!

So while we wait to learn which way Xenophon and team will go we can help convince Senator Hinch that the best thing he can do at this stage is to just vote no on the government’s cuts to PPL.

In his statement, he said that he and his staff will be working over the weekend on the legislation and looking at how it might be improved– so let’s help him!

Hinch’s turn around just goes to show how powerful it is when we make sure the politicians hear directly from us in the thousands.

We’re so close to seeing the end of the government’s attack on PPL – together we’ll win!

Our campaign is working...

Today South Australian Senator Nick Xenophon confirmed that his team of 3 Senators will not be supporting the government's proposal to bring in cuts to paid parental leave from 1 January 2017. This obviously is a huge relief for many women due early next year who Turnbull had left in a panic when he told them they'd have to throw what ever leave plans they had out the window.

But we haven't won yet.

Xenophon is still to rule out supporting the government's PPL cuts. In the statement he made today he said -

"I know that another potential start date is October 1.

"There is a lot of negotiation to do with Mr Porter and with [Treasurer Scott] Morrison in relation to that, including issues that have been raised with me about the whole aspect of there not being any means test for the household as a whole."

He said a delay of nine months would be reasonable. Essential Baby reports

Clearly we still need to convince Xenophon and his team that they need to help us get the Turnbull Government to #dropPPLcuts altogether - make sure you send his team an email today and get your friends and family to do the same!

Today we learnt Malcolm Turnbull wants his cuts to PPL to start on 1 January 2017.

That’s just 70 days away. It means women who are 30 weeks pregnant today and give birth on their due date will have the time they’ve planned to spend with their newborn babies slashed.

It’s cruel and it’s unfair. We need to stand together and make sure this doesn’t happen.

Pregnancy is often a stressful time in a woman’s life - we need to stand with thousands of Aussie women and help them fight for the leave they’re entitled to.

Join our campaign to stop cuts to PPL and share it with your family and friends.

Let’s make sure Mr Turnbull knows that if he pushes ahead with this plan - he’s going to have to withstand a massive public backlash led by thousands of parents.

No matter how much we plan, having a baby is filled with uncertainty. Whether it’s the due date, gender or the birth not really going to plan – pregnancy is full of surprises.

One thing that should be certain is how much paid parental leave we can access once our baby arrives. Families need certainty to plan their lives – from which parent will take leave to whether to even try for a baby to begin with.

The Turnbull Government continues to support a policy that would cut the amount of government-funded PPL for mums who also receive employer-funded PPL. This will cost families up to $11,800 per child.

Not only is there no timeline around this plan, but it also remains unclear if the government can even get their cuts through the senate.

It’s time for the Turnbull Government to permanently drop their cuts to PPL, so women and their families have the certainty they need.