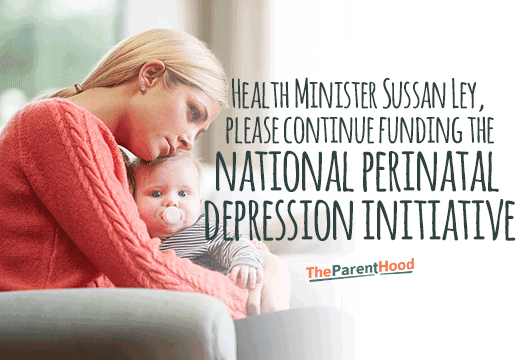 Join our campaign to tell the Federal Health Minister, Sussan Ley to immediately reverse the decision to cut federal funding for the National Perinatal Depression Initiative.

"Around 100,000 new or expecting parents will struggle with perinatal depression and anxiety every year in Australia."

Yet the Federal Government has decided it will no longer help fund the support and care parents can access under the National Perinatal Depression Initiative (NPDI).

Join our campaign to tell the Federal Health Minister, Sussan Ley to immediately reverse the decision to cut federal funding for the National Perinatal Depression Initiative - sign our petition today!

In 2008, the state and territory governments together with the federal government created the National Perinatal Depression Initiative (NPDI) aimed at helping new parents struggling with depression and anxiety relating to the birth of their new child.

The Abbott​ Government has ripped up that agreement.

The Federal Health Minister Sussan Ley gave notice to the State and Territory Minister’s in early June that the federal government decided to withdraw its funding of the NPDI – effectively ending the National Partnership Agreement it has with the States on this vital health initiative.

WHAT IS THE NATIONAL PERINATAL DEPRESSION INITIATIVE?

The NPDI focuses on the prevention and early detection of antenatal and postnatal depression and anxiety. It focuses on providing the care, support and treatment  new parents experiencing depression or anxiety need.

There are five key elements of the initiative:

This is a critical period for the mental health of both mother and child. 1 in 7 new mothers will experience some kind of perinatal depression or anxiety. Women are at increased risk of mental illness during the perinatal period with suicide the leading cause of death for mothers in the first year after birth.

Despite this, the Federal Government has chosen to discontinue funding the NPDI after June 30th 2015!

ACT NOW and tell the Federal Health Minister, Sussan Ley, to immediately reinstate federal funding to the NPDI. Can you sign our petition and join our campaign to ensure this funding and the NPDI continues and new mothers (and fathers) receive the care they need?

Call to speak with someone today

PANDA's National Perinatal Depression Helpline, provides vital support, information, referral and counselling to thousands of Australian parents and their families.  Callers do not need to have a diagnosis of antenatal or postnatal depression to make contact with the Helpline, PANDA is keen to support any new parent struggling during pregnancy or after the birth of their baby, as well as their partner, family and friends.