"Snapping back" to the old Child Care system will be disastrous! 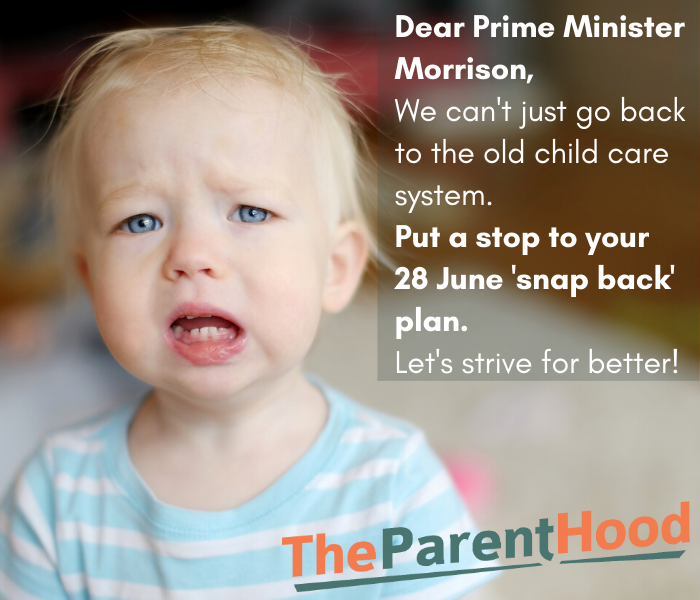 We need to urgently fix early childhood education to protect centres on the brink, ensure kids can access the education and care they need and help families adjust to the “new normal”.

Snapping back to the old unsustainable system right now would be disastrous.

Join us today as we call on the Prime Minister Scott Morrison to urgently put a stop to plans to ‘snap back’ to the old system on 28 June. We must strive for better.

Comments from the Prime Minister over the weekend indicating the government intends to wind back free childcare on the 28th of June have sparked grave concerns for parents and the sector.

We need to put a stop to the government's plans to pull the rug out on free childcare and ‘snap back’ to the old system on 28 June.

Instead the Prime Minister Scott Morrison and Minister Dan Tehan need to urgently fix our early childhood education sector to protect centres on the brink, ensure kids can access the education and care they need and help families adjust to the “new normal”.

Issues like educators being ineligible for JobKeeper and Family Day Care and in home care effectively being asked to take a 50% cut need to be addressed urgently.

More than 600,000 Australians lost work last month alone, and now hundreds of thousands of those are deeply worried about reports the government is planning to “snap back” to a childcare arrangement that was already deeply flawed.

To simply “snap back” to the old system is pulling the rug out from under families, just as they’re starting to get going again. It will be disastrous.

With hundreds of thousands of people out of work, ‘snapping back’ will compromise this vital sector’s ability to survive, as well as place undue economic pressure on parents who are already squeezed.

'Snapping back’ to the old system is not sustainable.

We can’t hope to get the economy going again when parents are faced with the choice of being able to work to get food on the table, or being able to put their kids into early childhood education and care,

When the reforms to childcare were announced six weeks ago, the commitment was that the arrangements would be for at least 6 months. Indeed, the Prime Minister said:

"This virus is going to take enough from Australians without putting Australian parents in that position of having to choose between the economic wellbeing of their family or the care and support and education of their children.

The rumours that the government is now going to unwind this important reform will force Australians to make exactly that choice.

We have a chance, in the next few weeks, to make the system strong enough that it can support all of us - we should act on it urgently and strive for something better.