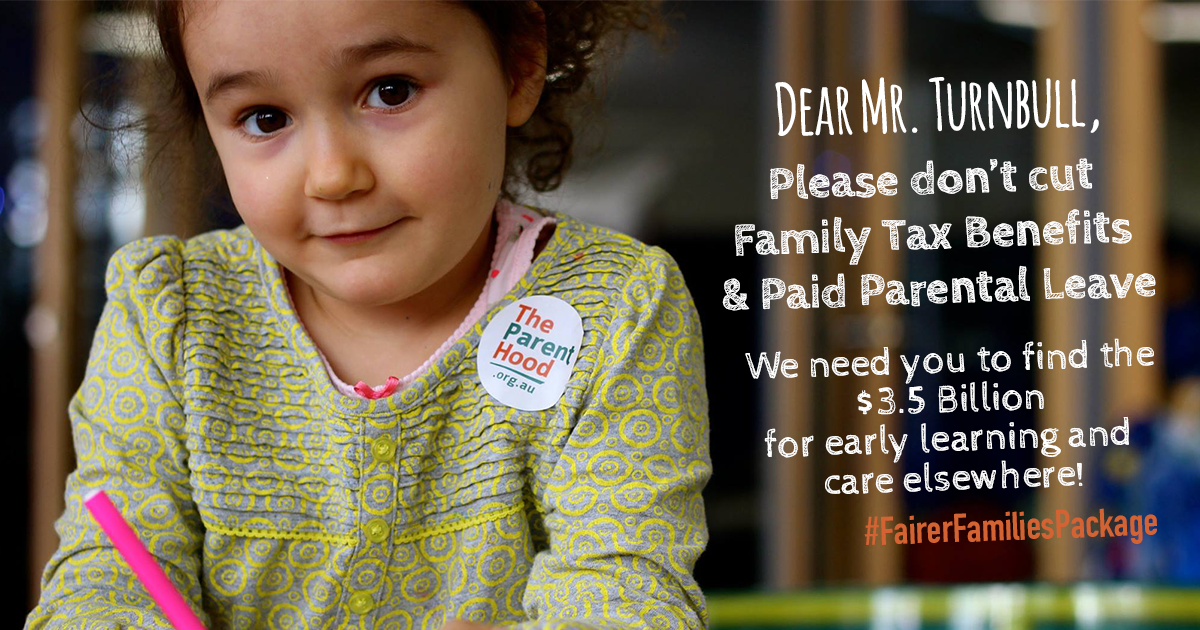 Soon the senate will vote on these changes - it's now more important than ever to make your voice heard.

Turnbull lessens the blow in cuts to Family Tax Benefits.

This is a significant milestone for the thousands of parents who have been campaigning against the cuts to FTB since they were originally announced.

But in reality the changes lessen the blow but still give a hit.

And the issue still remains that the government appears committed to the idea that they need to take from one family in order to give to another – that the only way to fund the new childcare package is by asking other families to pay for it.

For instance, despite changes announced today, sole parent families with teenage children still look set to lose $2000– that’s a lot of money to a lot of families.

Urgent action is needed to address the affordability and accessibility of childcare but we don’t think it’s fair to ask other families, in particular sole parent families, to pay for it!

If the Government was serious about supporting Australian families they would stop looking at measures that hit the family budget and find an alternative way to fund their childcare package.

What a whirlwind few weeks in Federal Politics! We’ve got a new Prime Minister, a new line-up of Ministers and a renewed optimism for change on some of the issues concerning us most.

There has been an increase of women in cabinet and a Minister for Women who is actually a woman! We’ve also got a new Education Minister and new Social Services Minister who we hope will offer a fresh approach to the policies of the Abbott Government.

The Education Minister has already announced that the plans to deregulate university fees have been shelved, until 2017 "at the earliest" - this signals that Abbott Government policy is not set in stone.

So what can this Turnbull Government do to help parents? To give our new PM a hand we've put together a helpful TO-DO list:

The next thing Mr Turnbull can do is drop his Government’s attacks on the PPL and Family Tax Benefits, and find the $3.5 billion in additional funding for child care elsewhere.

Mr Turnbull believes he will be a better PM than Abbott and we think he can show us this by delivering a Fairer Families Package.

Can you add your voice to the hundreds of parents calling for Mr. Turnbull to find another way to fund the Families Package?

The Federal Government has proposed to increase the childcare budget by $3.5 billion to help more Australian families better afford early learning and care.

Instead of using funds from his $5.5 billion scrapped PPL scheme – The Prime Minister is prepared to break his promise to Australian families by insisting that money available to spend on early learning & care must come from stripping back the current Paid Parental Leave scheme AND taking away the Family Tax Benefit payments so many families, in particular sole parent families, depend on.

This is simply wrong and The Parenthood will be fighting it every step of the way.

Here's what you can do –

Then CLICK HERE to - Send a message to a cross bench Senator.

With Labor and Greens currently committed to blocking the cuts to the Family Tax Benefit payments in the Senate the Government is depending on the support of these Cross-bench Senators to pass the cuts.

Messages from parents have a critical impact on the voting intentions of key crossbench Senators  - we know this after thousands of Parenthood members made a critical difference in keeping these cuts to Family Tax Benefit payments stalled in the Senate since their announcement in last year’s budget.

Let’s keep up the pressure!

Send the Senator/s from your State an email right now and tell him/her that Australian parents don’t support cuts to the Family Tax Benefits & PPL.