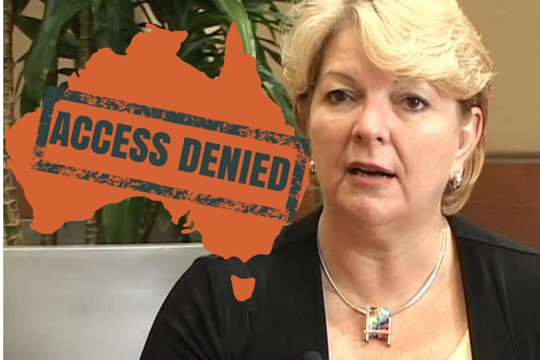 “Australia should be proud that as a nation, we have the ability to recognise when someone is trying to mislead us, and react accordingly.” John Cunningham, a surgeon and spokesman for the pro-vaccination group that campaigned against Dr Tenpenny’s tour.

Thousands of parents, the medical profession and other supporters rallied together to #stoptenpenny and we did! But there’s still so much more you can do to help #boostimmunisation rates. See where The Parenthood stands  on immunisation andshow your support here for a national campaign to stamp out misinformation.

A dangerous person is coming to Australia to spread a dangerous message that has the potential to end lives.

In February & March American anti-vaccination campaigner, Dr. Sherri Tenpenny is scheduled to give a series of seminars that encourage Australian parents not to vaccinate their children. Dr. Tenpenny’s seminars are a serious public health risk and we believe the Australian Government should stop her anti-vaccination message from hitting our shores.

We are urging the new Immigration Minister (and former Health Minister), Peter Dutton to stand up to the people behind this deadly misinformation.

We want the Minister to stop Sherri Tenpenny from entering the country to spread her dangerous misinformation and lies about vaccinations.

Minister Dutton holds the power to refuse an individual’s travel to Australia if a person fails a test of character. Last year, Minister Scott Morrison used this power to cancel the visa of ‘pick-up artist’ Julien Blanc for “putting a view that was derogatory to women”. We believe Sherri Tenpenny would also fail a test of character given her desire to spread misinformation and lies that put our children’s lives at risk.

Science has repeatedly proven that immunisation does not cause autism and there is plenty more compelling, real evidence that shows how unsafe it is to miss out on childhood vaccinations. The lies spouted by Tenpenny and her supporters are manipulation and misinformation.

Right now, there are 75,002 Australian children aged five and under who aren’t fully immunised. One in five of those, or 14,869 children, are because their parents have chosen not to vaccinate their child. It’s hugely concerning that Australian immunisation rates for measles place us well below many far less-developed nations, including Botswana, Cuba, Thailand and Zimbabwe. And given we have the highest rate of whooping cough of all developed OECD countries, we cannot afford to allow Tenpenny to spread anymore lies.

Will you join us and urge Minister Peter Dutton to #StopTenpenny from spreading her unfounded anti-vaccination message on Australian shores?

Read more about our position on immunisation here.