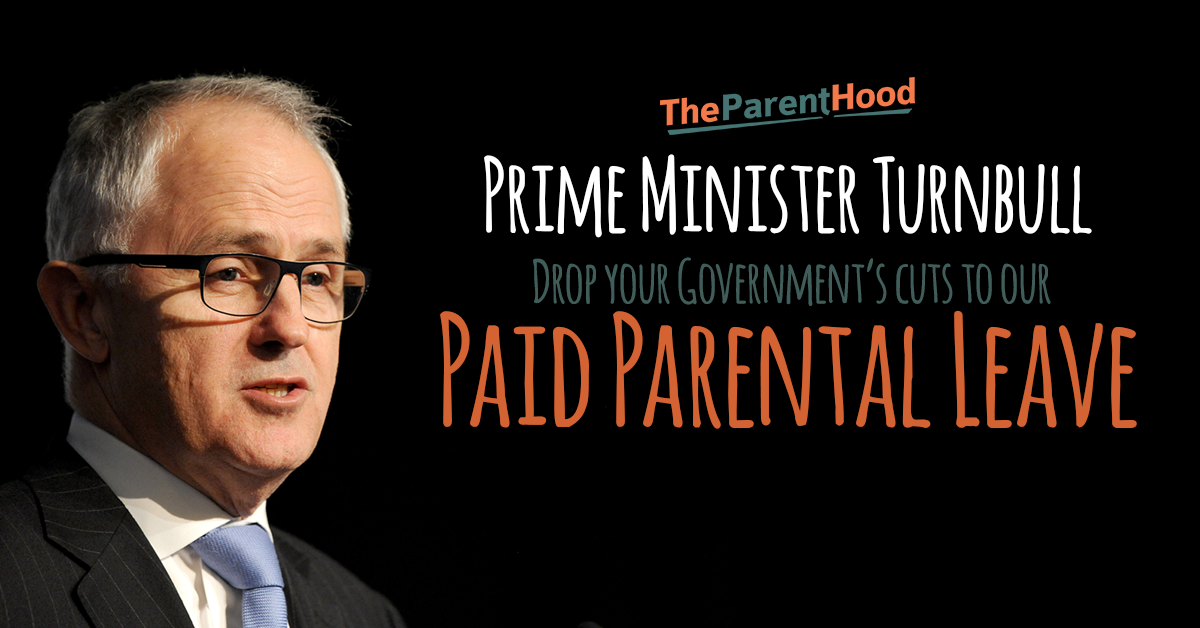 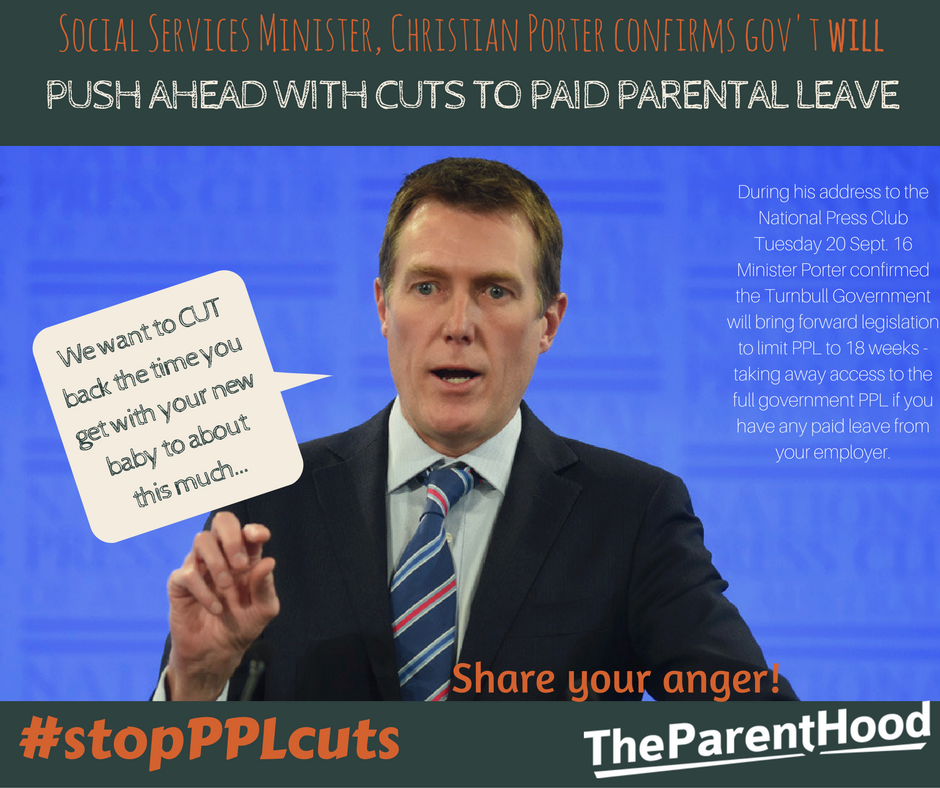 Social Services Minister, Christian Porter has confirmed the Turnbull Government will push ahead with its plans to strip back the Government's Paid Parental Leave Scheme.

During his address to the National Press Club on Tuesday 20 September 2016, Minister Porter confirmed  the government will soon present laws to parliament to change paid parental leave access.

This legislation will limit paid leave at home to 18 weeks. Anyone who receives any paid leave from their employer will no longer have access to the full government paid leave, therefore will see the time they could otherwise afford to spend with their brand new baby cut back.

Australia has one of the least generous paid parental leave schemes in the developed world and now our Prime Minister wants to take us even further backwards!

"I think any move to pare back the support that you need at a time when you're welcoming a new baby into the family, or to pare back women's ability to come into paid work, will mean that we just reinforce some of the gender gaps that currently exist for women," Elizabeth Broderick, National Press Club, 2 September 2015.

We must put a stop to this attack on our Paid Parental Leave scheme - make sure you join our campaign today and tell your friends to do the same!

The Turnbull Government conceded it will not be able to pass its proposed cuts to Paid Parental Leave in this Parliament, following significant backlash from Australian mums and dads! That's you!

Minister Porter’s announcement came after community campaigning by groups including The Parenthood secured enough votes in the Senate against the changes.

It is a big win for The Parenthood and our thousands of members and brings good news for those with bubs due in the next few months.

The government’s continued attacks on new parents’ paid time at home has been leaving expectant mums and dads in the lurch - frustrated and anxious over the uncertainty of whether or not they’ll be forced to leave their new babies too early.

But unfortunately, taking time away from parents and their newborns remains a Turnbull Government policy....

So our campaign continues and we have issued a warning to the Prime Minster - take cuts to paid parental leave off the table or expect backlash from working parents on Election Day!

Prime Minister Turnbull does not have the support he needs to get the cuts to PPL through this current Parliament. Senators Lazarus, Lambie, Madigan and Xenophon have now all publicly committed to vote against any cuts to paid parental leave.

This is a HUGE WIN and is thanks to every single parent in Australia who stood up against these cuts.

So now obviously it’s time Malcolm Turnbull took cuts to PPL off the table for good. With only 3 months until the government had told us these cuts would take effect, continuing to push them only causes confusion and anxiety for pregnant mums due post July this year

BUT - with Malcolm Turnbull announcing he intends to bring forward the Budget and hold a double-dissolution election on July 2 if he doesn’t get his way on the Australian Building Construction Commission (ABCC) -we’re not out of the water yet.

We need to make it crystal clear to Malcolm Turnbull that paid parental leave will be a key election decider as it was when Tony Abbott originally promised 6 months full pay at before the last election.

Let’s make sure cuts to PPL are not on the table this election - in fact this election should be fought on who has the best plan to improve our already inadequate PPL not how they plan to strip it back.

This month we learnt that the Social Services Minister Christian Porter is canvassing a ‘new’ paid parental leave policy with the cross-bench senators.

Now the government wants to limit paid leave at home to 18 weeks - and provide nothing on top of this.

Just a quick reminder - right now new parents can access 18 weeks at the minimum wage AS WELL AS any extra paid leave they can get from work.

This means that parents can extend the time they have with their newborn - being able to afford to go beyond 18 weeks to the full 6 months as recommended by the World Health Organisation.

We convinced the Turnbull Government to back away from their original $1 billion cuts to PPL - they’re now down to about $930 million worth of cuts.

Lets get them down to $0 by making sure the senate doesn’t support any policy that limits the time we can spend with our new babies.

“The mother of all insults”.

Just when parents were getting excited about a childcare package that is set to help thousands of working parents across Australia, the Treasurer dropped the bombshell that parents will no longer be able to access government paid parental leave if their employer offers it.

This decision will affect 80,000 parents and will see almost half of the parents eligible for the paid parental scheme lose $11,500 in leave benefits.

Now it's up to our new Prime Minister, Mr Turnbull to distance himself from those comments and stop the Federal Government's attack on the PPL!

Time to get off the PPL rollercoaster and get on with the job of making PPL better not worse.

Turnbull has promised the Australian people he'll do a better job than Abbott – well here’s his chance – stop the stripping back of our PPL scheme!

Can you add your voice to the hundreds of parents calling for Mr. Turnbull to cease the attacks on the PPL?