We have a new Government. This feels good!

The people of Australia have spoken and the message was clear. Collectively, we believe in better and we have elected an almost unrecognisable Parliament and Senate to build a better future.

The next Parliament of Australia is inching closer to reflecting the population it will seek to represent. Us. All of us.

And while it is true that the composition of the next Parliament is more varied than ever before, with a cross-bench of up to 16 members, the values on which the successful candidates and parties campaigned on are shared.

Integrity, climate and gender equity are not just buzzwords. They are values that almost two-thirds of voting Australians endorsed at the ballot box. The result on Saturday was a rejection of the status quo as much as it was a heady affirmation that doing things differently - doing things better - isn’t just possible but paramount.

For too long, too many Australians haven’t just felt ignored, they have been ignored. And rather than accept that, they got busy changing it. The electoral map is unrecognisable as a result.

For The Parenthood community the election result is monumental. That we have a new Prime Minister, Anthony Albanese, who just two weeks ago prioritised sitting down with some of our members to listen to their stories about the struggles and juggles their families face is significant. 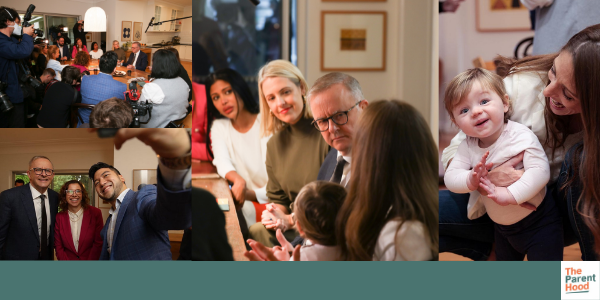 But even that pales compared with the fact that our new Prime Minister has campaigned on making universal access to quality, affordable early childhood education and care a reality for Australians.

‘No one left behind and no one held back’, words spoken by Prime Minister Anthony Albanese in his victory speech on Saturday night, encapsulate the objectives of our policy priorities.

Significantly, it is not just the Prime Minister or the Labor party that supports these ambitions. The Greens, who did well across the country in the senate and the house of representatives, support these ambitions. Of the six ‘Teal’ Independents who succeeded in their community run campaigns to unseat the safest of Liberal seats, all of them support early learning reform.

In NSW, Kylea Tink in North Sydney, Dr Sophie Scamps in Mackellar and Allegra Spender in Wentworth, in Victoria, Dr Monique Ryan in Kooyong and Zoe Daniel in Goldstein and Kate Chaney in WA’s Curtin.

Indi’s Helen Haines and Warringah’s Zali Steggall were both re-elected and both have been long-standing supporters of better policies for families.

Whichever way you cut it, there is majority support in the lower house to deliver a better deal for children, women and families. It is a very good time to be invested in evidence-based policies to reduce gender inequity and improve outcomes for children and families.

This feels good. Thank you for being a part of this community. We look forward to continuing our work with all of you to ensure Australia embraces positive policy changes for families.

PS On a side note, this is coming to you today rather than yesterday on account of me being knocked sideways with Influenza A. Our household has so far inexplicably avoided contracting COVID19 but the flu got us and I’m not joking when I say it is brutal. Book in your flu shot if you haven’t already as it’s nasty.