Michael & Seema: Our three children were all born in Berlin, Germany, and to be honest, it was only when we moved to Australia – 4 years ago – that we both realised what a great place Germany, and in particular Berlin, is for parents to live and work.

Michael: In Germany, you can take up to three years of parental leave in the first 8 years of your child’s life. As part of the parental leave system, you are also allowed to reduce your working hours which I did after the birth of our first son, Kiran, in 2010.

I went down from working full time to working only 20 hours to spend time with our son, and to enjoy being a parent, and I did that for 18 months.

Seema: After 18 months, we decided to send Kiran to an early learning centre (called Kindergarten in German), like pretty much all the parents were doing in our neighbourhood, though sometimes earlier than 18 months of age.

In 2013 our second son, Yanik, was born and we did it all over again. I did some freelance work and consultancy work that I was able to do while mostly being home with our baby. Michael reduced his work hours and took flexible parental leave for another 18 months.

Michael: My boss at the time wasn’t too happy about me doing that again, but there was nothing she could do as I had every right to do so. There were no consequences for me in the end. The whole team (except my boss for some time) was really supportive and quite a few other men had already taken parental leave, so it wasn’t actually such a big deal.

Michael & Seema: And again, after 18 months we decided to send Yanik to the same Kindergarten as our older son Kiran. Both our sons went full time (which is what the institution encouraged for friendship and routine) and we paid around 100 Euros per month, which is around $150AUS. For a month!

Both our boys went to Kindergarten from 9am to 4pm, every weekday, and got breakfast, a hot lunch and afternoon tea  - and it cost $150 per month which was for food. There was also no social judgement from anyone - friends, family or colleagues - that we were sending our kids to childcare. It felt like it was what everyone did, that it was good for the children to have time away from their parents and vice-versa, to play, learn social skills, participate in sport, art and craft and have excursions to the zoo and museums with other children their age. 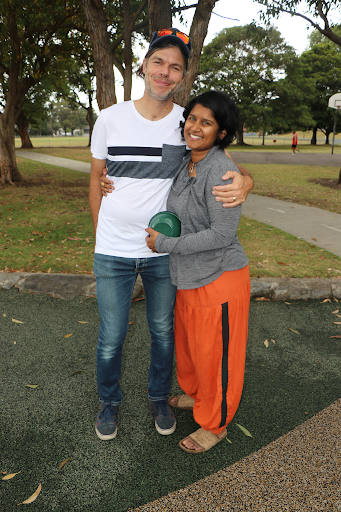 Michael: In 2016, our daughter Anoushka was born. This time I stopped working and took two years of full parental leave. That  was around the time  we decided to move to Australia. Seema is Australian and after almost 8 years living in Germany, she'd had enough of grumpy Germans and the permanent grey sky!

Seema: Back in Australia, I started working full time straightaway and was happy being back in the “non-domestic workforce”. After working part time for most of the last six years I was looking forward to new challenges, career progression and, to be honest, earning more money, and Michael was happy for me.

Michael & Seema: Our boys started at the local public school and loved it straight away, having had their time in German kindergarten for several years.

But for Anoushka who was 18 months old by then it wasn’t so simple. Trying to find a full time spot at an early learning centre, for $150 a month, with meals included?

No, not in Newcastle! Not anywhere in Australia.

So, like many parents, we managed… and joined the ‘struggle-juggle’...

Michael: I worked part time for the past two years, and we’ve spent a fair chunk of our earnings paying for Anoushka’s 3 days at an early learning centre. Working part-time had quite a significant impact on my super as I resigned from a well paid, full time job that was also permanent. I reckon that ‘my career’ definitely slowed down because of it but I also know 100% that it was the right thing to do for our family. I can’t expect Seema to be the only parent who works part time.

About eight months ago we decided to change roles again.

Seema: After working full-time for three years I was ready to slow down a bit and when my employer agreed to reduce my hours I was happy to accept it.

Michael: Maybe it sounds a bit cheesy but for me it was exactly the opposite. I was ready to work full time again and when my future employer (The Parenthood!) told me that I could work from home and have flexible hours, I was excited and happy to sign the contract.

Michael & Seema: As most parents know, it is a constant balancing act. It’s exhausting to have discussions all the time with your partner about who is going to drop off and pick up the kids from school and from childcare. How many days can we afford to send our daughter to early learning? Does it make sense to work and earn more?

We both wish we didn’t have to, but the current system here in Australia almost forces parents into these weekly (sometimes daily!) discussions about caring costs and the overall financial implications. It’s stressful and we are not sure if we would have had three children here in Australia. Germany’s parental policies are far from perfect but compared to Australia they are a lot more supportive.

We strongly believe that early childhood learning services are educational institutions and education should be universally accessible and more affordable. It’s best for children, parents and society as a whole.

Michael and Seema from Newcastle
Three children - 10, 8 and 5 years old

We are calling on every Federal political representative to make elections commitments on:

1. One year of Paid Parental Leave to be shared between parents.
2. Universal access to Early Childhood Education and Care and Outside School Hours and Care delivered by a well supported and properly funded workforce.