I was very fortunate that the law firm that I was working for when I had my first child, Dylan, rewrote their parental leave policy to allow a gay person having a child through altruistic surrogacy to access parental leave.

Nic and I didn’t access the government Parental Leave Pay, as I was able to access parental leave pay from my law firm, and wasn’t sure if we qualified for the government pay. To be honest, the information was really hard to disentangle and we were pretty happy with what I’d received from the law firm so we just chugged along.

Initially, the policies at my workplace were written in a way that assumed a woman was going to be the primary carer. They had just changed the policy to include adoptions, but were in the middle of a review of their policies. The law firm had an amazing Flexibility and Diversity Consultant who worked with me to reframe each of the steps in their policy in order to access parental leave. At the same time, the partners at the law firm were really supportive and I feel very grateful looking back at how they were so willing to embrace my dream of becoming a father. I didn’t encounter any issues at all and it was almost a “yes, this makes sense, how do we make the policy work more fairly”.

The great thing is that when my second son came along, I was working in a university and they also had policies that had already been amended to respond to the various scenarios where an employee might become a parent. So from a work front, I had a very good experience.

So the plan was for me to be primary carer for the first four months of Dylan’s life, and then we would try and get him into daycare from the fifth month on. However, that was pretty naïve on our part.

What we didn’t realise living in Sydney at the time was how tricky it was to get a place for your child if you hadn't put their name down almost at the start of the pregnancy journey. And so here we were with a newborn trying to get a daycare place - and it was very clear to us that we were very much clueless about childcare and schools (I think it stems primarily from not having many parents in our social circle). We had spent all our energy trying to become fathers that by the time Dylan was born, we suddenly realised there were actually many ducks that we hadn’t been aware of that were not quite lined up. We were only offered two days of daycare from when Dylan was 6 months old and that created quite a bit of a childcare challenge. 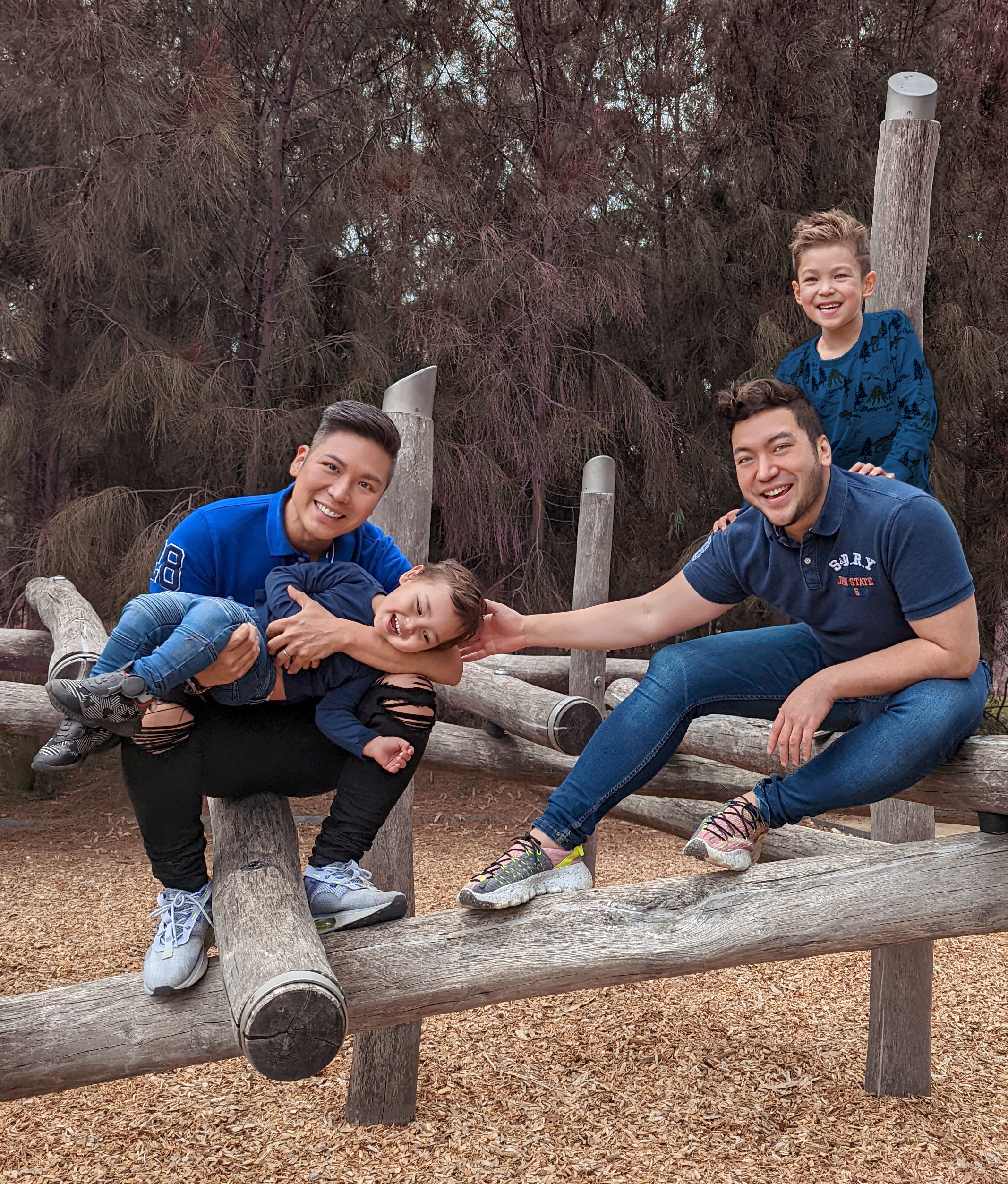 In the end, Nic’s mum offered us four weeks’ care to get us to the sixth month. Nic ended up resigning from his job as a veterinarian, and we opened a vet clinic on the ground floor of our house. We had fortunately planned in advance for Nic to start a part time business in order to give him the flexibility to take care of Dylan while still growing his career. Gradually we were able to build up to having Dylan in daycare five days a week (it took us almost four months to get there). But the experience of trying to juggle family and the business and private practice in law and expensive childcare (about $160 a day) was quite tricky. We knew when Dylan was around six months old that we were going to move from Sydney to a different city.

We left for Brisbane just after Dylan turned one. I’d moved up with the law firm I was with and they had a tie-in with a childcare centre at the lower floors of the new building we were in.

Childcare fees for us dropped from $160 per day to around $110 per day (it also got a little cheaper because Dylan was older). It made a huge difference. There were childcare centres closer to where I’d worked in Sydney CBD, but they were even more expensive at $175 per day. So to be able to move to Brisbane, have the childcare centre right where I worked and pay 30% less in childcare fees was a brilliant outcome.

I would spend my lunch hours downstairs with Dylan, playing with him and patting him to bed, then head back upstairs to work again. And when I had to work late, the fact that I had my lunch hour with Dylan while Nic tucked him into bed really made a huge difference – I felt less guilty about sometimes missing bedtime stories (admittedly, the hours did get to me in the end and I moved into academia for the flexibility and work-life balance).

The savings in fees did allow us to think about whether we could afford to raise another child.

We have had friends who didn't have as supportive employers and who struggled to access local childcare. But we have seen such changes in the parenting space over the past seven years. Increasingly, people are waking up to the fact that it makes sense to make childcare more accessible and for governments to focus on improving conditions not just for parents but the incredible childcare educators who make such a difference in our lives (particularly during the pandemic).